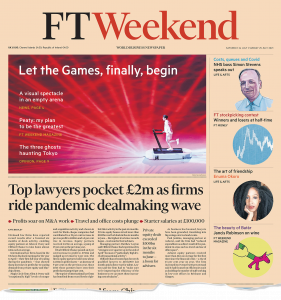 As law firm trainees continue to be lured with ever greater amounts of cash – primarily driven by the London offices of big US firms – the most recent move in the bidding war to attract the best and the brightest has seen Vinson & Elkins push NQ salaries above £153k. On qualification, these lucky twentysomethings will find themselves on a financial par with the Mayor of London, Sadiq Khan (annual salary: £152,734), and just a roll or two of wallpaper behind the PM, Boris Johnson (annual salary claimed: £157,372).

Beyond money, law firms also compete for talented graduates with seductive talk of FT front page stories about deals or disputes on which they could be working as a trainee in their ranks. This does not, however, include stories about the firms themselves. “It is a not a good day at the office for the managing partner when the firm becomes the story,” wrote Chris Saul recently in his excellent LinkedIn blog. As the former senior partner of Slaughter and May from 2008-16, he should know.

It was therefore interesting to see the FT’s front-page splash on Saturday 24th July. Top lawyers pocket £2m as firms ride pandemic dealmaking wave proclaimed the headline. Fuelled by a surge in M&A and $500bn in private equity deals during the first half of 2021, the story focused on “sharp increases in profit” at Allen & Overy and Clifford Chance. Although the remaining Magic Circle trio of Freshfields Bruckhaus Deringer, Linklaters and Slaughters have yet to announce their results, there is every reason to believe that they enjoyed an equally stellar year.

Among UK law firms to have already announced their results, the average annual increase in profits per equity partner (PEP) exceeds 20%. Last week, RPC revealed a 23% revenue hike and a 50% year-on-year jump in PEP. Increases of this magnitude, especially during a year of Covid-19 and widespread economic hardship, may have caught the eye of Rishi Sunak and his Treasury team as they seek to bring the ballooning deficit under control.

The pandemic has changed everything, creating a bleak fiscal legacy. The extra funding required to support coronavirus support schemes, combined with reduced tax receipts and a huge hit to GDP, pushed government debt as a ratio of GDP above the 100% mark – a 60-year high.

In his March 2021 budget, Chancellor Sunak announced a Corporation Tax increase from 19% to 25%, effective from April 2023, but there was no mention of windfall taxes. This does not mean that the idea has been entirely rejected; rather, it has been postponed.

The media has been awash with windfall tax stories. Online retailers such as Amazon may yet face an “excessive profits tax” under plans reportedly being considered. Amazon’s UK sales soared by 51% last year to a record £19.4bn. According to the Sunday Times, the No 10 policy unit has been working on proposals for a one-off windfall tax that would impact major businesses that have seen above average profits during the pandemic. Billionaire mobile phones entrepreneur John Caudwell told the Sunday Times that Sunak should levy a one-off tax of 90% on excess profits for those who have benefited from the pandemic.

Meanwhile the Times reported in July that “official figures showed that the legal profession had a record-breaking month in March 2021 as overall revenue was £4.06bn, an increase of nearly 20 per cent on March last year.” This monthly figure is more than twice the annual budget for criminal and civil legal aid.

Strictly speaking, law firm revenues and profits that are derived from advising companies, banks and governmental bodies on M&A, capital markets and governance have often had little to do with the pandemic, per se. But it is an unfortunate coincidence that big commercial law firms have made what might be regarded as “excessive profits” at the same time as many businesses have struggled or been forced to close.

The most recent politicians to advocate windfall taxes, Jeremy Corbyn and John McDonnell, were the chief architects of Labour’s 2019 general election manifesto that proposed taxing oil and gas companies to raise £11bn as part of the transition to a green economy. Given that Labour’s election defeat was its worst since 1935, windfall taxes might seem a bad idea. Despite calls from The Resolution Foundation and The Tax Justice Network for windfall taxes on excess profits during the pandemic, Keir Starmer does not the support them.

Nevertheless, the use of windfall taxes has an interesting history under both Conservative and Labour governments. Indeed, Margaret Thatcher was a notable proponent. In 1981, the then-Chancellor Geoffrey Howe introduced a special budget levy, recouping around £400m from the banks which were seen to be escaping the effects of the 1980-81 recession. That levy was equivalent to roughly 20% of their annual profits.

In 1997, Tony Blair and Gordon Brown followed suit. The Labour government used windfall taxes, targeting what were described as “the excess profits of the privatised utilities”. Roughly £5bn was raised from BAA, British Gas, British Telecom, PowerGen and others to fund the New Deal welfare-to-work programme.

Would a windfall tax on law firms be popular? Another FT headline may provide an answer: Majority of UK public supports windfall taxes. The story detailed a YouGov survey of 1,682 people: 53% of them supported the idea of an “excess profits tax” on industries that have thrived during the pandemic, with only 13% opposing it – a ratio of 4:1 in favour among those who expressed an opinion.

Taking the 1981 bank levy as an example, a one-off levy on the profits of the top 100 UK law firms could potentially raise anywhere between £250m and £1bn for the Treasury, subject to how it was determined. Much more certain is the range of problems it would face in practice.

By far the most significant is that very few City law firms are companies; most are limited liability partnerships (LLPs). How each partner pays tax on his/her earnings depends on their employment status – i.e. whether they are equity or salaried partners. HMRC outlines strict conditions for partners to be treated as self-employed for tax purposes: their draw must not be entirely fixed; they must have significant influence over the partnership’s affairs; and they must have made capital contribution(s).

Shifting a windfall tax to individual lawyers’ earnings via income tax might seem superficially attractive to some, but this would ignore other very high earners: bankers, accountants, fund managers, CEOs of FTSE100 companies, as well as film/tv stars, pop stars, footballers, and so on.

In this context, levying higher taxes on lawyers earning say £2m a year while ignoring, for example, the 570+ Premier League footballers earning £3m a year (the average Premier League salary) would be inequitable, unworkable, and contrary to longstanding taxation principles adhered to by HMRC and the Treasury.

One alternative might be to take a slice off the top – taxing revenues rather than profits. During his 14-month tenure as Justice Secretary in 2015/16, Michael Gove put forward a radical hypothecation proposal: a 1% lawyers’ levy to make City law firms pay for legal aid funding, which had been savagely cut by the coalition government of which he was a key member. The Times reported that Gove’s proposed levy on the turnover of the top 100 UK law firms could deliver £190m to the Treasury coffers.

Although taxing corporate revenues is highly contentious, the Digital Services Tax, which came into effect in April 2020, does provide a precedent: a 2% tax on the revenues of companies with more than £500m global revenue and more than £25m UK revenue. This relates to big internet players which derive value from UK users via search engines, social media services and online marketplaces. Back in 2016, Gove decided that this model would not work for law firms. The idea was scrapped.

In my recent conversations with managing partners, the usual sense of pride in a strong financial performance has been tinged with embarrassment at just how well their firms have done over the past year. For Sunak and his Treasury team, the prospect of introducing some form of windfall tax on lawyers (and others who have benefited from excessive profits during the pandemic) must be very tempting, notwithstanding a holy trinity of obstacles: politics, protest and pragmatism.

But if the appeal of introducing such a tax in some form ultimately proves compelling – and it’s a very big if – exactly how and when he might implement it in an equitable, pragmatic fashion remains to be seen.

Next Article"Reports Legal featured in the Times"